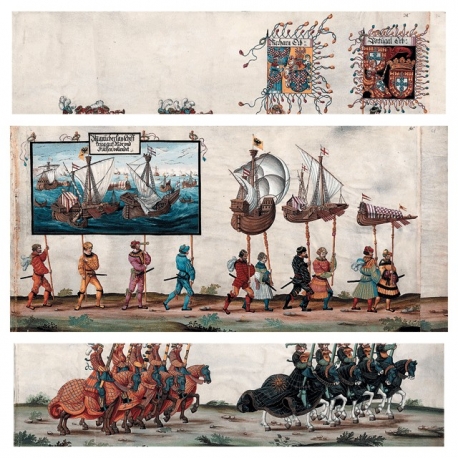 The triumphal procession of Maximilian collection

Holy Roman Empire consisted of great amount of various territories of different areas, significance and religious affiliation. Each territory was ruled by its own governor (king, duke and landlord) which swore fealty the Emperor. The triumphant procession is a festive entrance of the Emperor to the city where he is accepted by the governor and noblemen who swear fealty to him. This tradition is of Rome and Byzantium ceremony heritage.
The Emperor of Holy Roman Empire Maximilian I (1459-1519, elected to be an Emperor in 1508) created huge «virtual » triumph which existed only on paper. «Triumph of Maximilian» (started in 1512 and was not finished by Maximilian’s death in 1519) contains over 130 big block-prints by Durer and other artists representing huge procession approaching the Emperor.
Waiting from postcrossing.com ...