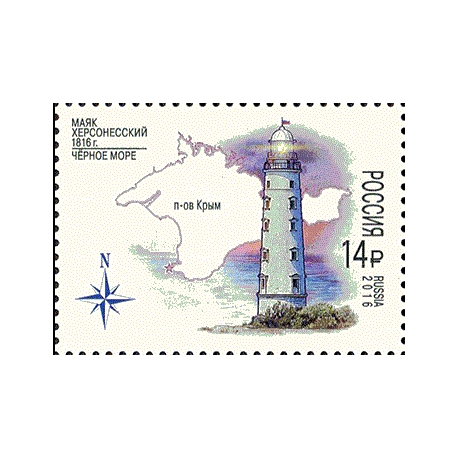 This product is no longer in stock

The Tarkhankut and the Chersonesus Lighthouses is located on the Black Sea coast of the Republic of Crimea. They are called “twin-brothers” because they both were built in 1816 by one and the same design and they were put into service in June 1817 after installation of parabolic reflectors that were delivered from St. Petersburg.

The Chersonesus Lighthouse belongs to Sebastopol, it is located on the most western point of the city. During the Great Patriotic war the lighthouse was completely destroyed and built anew in 1950-1951 by the military engineers of the Black Sea Fleet. The white architecturally styled reinforced-concrete lighthouse’s tower topped by a huge glassed-in lantern construction is 36 metres high. The tower is coated with Inkerman limestone The Chersonesus Lighthouse is known by the seamen by the signal letters “SB” that is short of “Sebastopol”. The lighthouse transmits this two-letter identifier in Morse code every night.

The postages stamps feature the Chersonesus Lighthouses against the maps appropriating to their location, and the mariner's cards.